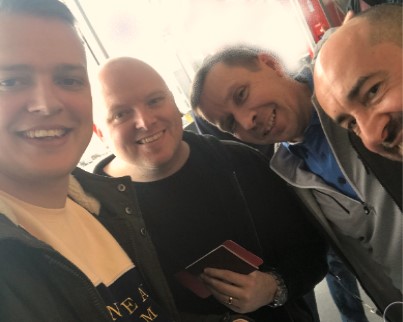 Over the past year, since assuming a new role within the sales team, I have been fortunate enough to attend the annual Esker Sales events, which have enabled me to have been lucky enough to travel to different parts of the world.

The only thing of course, in terms of travelling to different worldwide destinations, is that they can be a rather long way, and a pretty draining day at that, for someone who’s not the best traveller in the world.

Starting at 7am sharp with my “taxi” to Heathrow with my colleague Neil, we were off to a good start.

Heathrow in itself is a pretty cool place and after a quick breakfast, we were aboard the plane – my first time travelling with Virgin Atlantic. Like I said, I’m quite a nervous flyer, so I like to get my seat near the window and zone out with a couple of films or some music and generally just trying to relax.

Things didn’t exactly get off to the greatest start when I saw that someone was sat in my seat and that my ticket was a duplicate! I thought I’d lucked out and an upgrade was headed my way, but for some reason, they upgraded the guy with the original ticket and gave ‘my seat’ back to me. But now I was in and ready to settle down – which was made even sweeter when the steward handed me a free glass of champagne for the inconvenience – so not all bad!

We made it to NYC where we would catch our connection. On a good day we would have had 2 hours to connect. On this day though, we were 30 mins late arriving, so had 90 minutes to get through customs/re-check bags and board the next flight – what I thought was easily doable…

Having been the first time travelling to the states, Neil and I were left in the ‘first time ESTA’ queue – which stated that it was 1 hour to wait and get through customs. Having eventually made it through, we grabbed our bags and headed for the Delta stand. The guy’s reaction when he saw our location/flight said it all, and him saying “you gotta run, and you gotta run now”, meant it looked likely that our bags might make it to our final destination before us. (Just a note here, in that I would highly recommend travelling with Delta if anyone gets the chance, as they were superb) .

Now, I’m a young(ish) lad (shout out to my US colleague Nick Carpenter here for being the baby of the event and taking it away from me), but running through a hot airport after an 8 hour flight is not something I advise. After asking very nicely to to be moved to the front of the security line, we hot footed it to the far corner of the airport (of course the gate was miles away) to board our plane with minutes to spare.

Sunday’s arrival gave us chance to acclimatise and to take in our surroundings for the first time. I couldn’t imagine it being battered by a hurricane not so long ago – and the guys at our hotel have worked wonders to get it back to how it looks now. Apparently, a completely flooded basement and 10 feet of water in the lobby is what they had to deal with, which is crazy!

The first day was great with all the team together and over the next few days we were able to share content in terms of new solutions and the company performance. I found all presentations and meetings to be excellent and full of superb information, questions & take home messages. I’m particularly interested on how we are growing as a company and the development in areas such as Artificial Intelligence (AI) and Robotic Process Automation. I was able to have some very useful discussions around these topics too.

Really liked the breakout approach this year and focusing in on specific parts of each solution we have for both the Order-to-Cash (O2C) and Purchase-to-Pay (P2P) cycles. I was in the P2P stream myself which had some useful messages & points raised – and after speaking to the guys in the O2C session, they said that was full of interesting content too.

The final night dinner was a picturesque setting and a chance for Esker to celebrate another year of success. In what seemed like the blink of an eye, it was then time for us to head home.

An amazing and memorable trip and something I feel very lucky to have had the opportunity to take part in learning, discussing and sharing ideas with colleagues from other Esker worldwide subsidiaries.

Can’t wait for next year, wherever it may be, and to celebrate more success!

Dan is a Business Development Manager for Esker UK. He has been part of the Esker family since 2013.